Largest study in England of oral infection with human papillomavirus 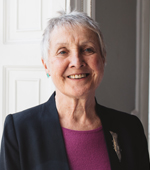 Dr Hilary Powers, Emeritus Professor of Nutritional Biochemistry at the University of Sheffield, is the Deputy Chair of our Expert Panel that oversees our Continuous Update Project (CUP). She discusses her team’s recent research into cancer and human papillomavirus (HPV) funded by World Cancer Research Fund (WCRF) UK.

Our recent publication in BMC Open reports on the largest study of its type in England of oral HR-HPV infection and associated risk factors. The study was conducted at the University of Sheffield in the UK, and supported by WCRF UK.

What did we do?

The team recruited 700 men and women in Sheffield, collecting cell samples from their mouths for the detection of HPV infection. Participants also completed a questionnaire related to smoking activity, alcohol consumption and sexual behaviours.

What did we discover?

No association was found between folate status and likelihood of oral HR-HPV infection. It is not clear whether this reflects a true lack of association, given the low infection rate, which limited our ability to confidently determine any association.

The future of HPV vaccination

There has been much interest in the potential value of the HPV vaccination programme for the prevention of cervical cancer. The programme in the UK has thus far focused on girls, but it has recently been announced that the programme will be rolled out to boys too. This is a move to be welcomed as it should lower the risk of all HPV-linked cancers, including cancers of the mouth and throat.

However, only 0.7 per cent of people infected with oral HR-HPV were positive for HPV16 or HPV18, against which current vaccine is directed – the majority of people were positive for other strains. This suggests that consideration should be given to developing newer vaccines for other HR-HPV strains.

These findings have generated considerable interest in health-related circles, and resulted in at least 21 news stories. The findings show a need for individuals to be aware of lifestyle risk factors for HPV infection, and the association with several cancers.

> Find out more about WCRF-funded research – including Dr Powers’ project