Home - Science Communication - The reality behind the headlines: women and cancer

The reality behind the headlines: women and cancer 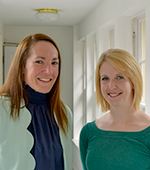 There will be 18 million diagnoses of cancer worldwide this year, with 8.5 million in women. This is equivalent to more than 23,000 new cases in women every day. It marks a substantial increase in the cancer burden since 2012, the last time these global statistics were compiled. Susannah Brown and Isobel Bandurek from our Science team explore some of the detail behind the numbers.

On 12 September 2018, the International Agency for Research on Cancer (IARC) published the latest global cancer statistics. This database records the total number of cases and deaths from 36 types of cancer across 185 countries, giving a unique insight into cancer trends across the globe.

Although lung cancer is the most common cancer worldwide (in men and women combined) and also the most common cause of death from cancer, lurking just behind these headlines are data telling the story of two important female cancers – breast and cervix.

Breast cancer will account for 2.1 million diagnoses this year, placing it just behind lung cancer in the overall ranking, despite only breast cancer in women being recorded in the database. These 2.1 million cases will be responsible for 12 per cent of all cancer cases (men and women combined) and a staggering 25 per cent of cases when only looking at women.

Rates of breast cancer are approximately twice as high in countries with a very high Human Development Index (HDI) compared with rates in countries with a low HDI – this index measures average achievement in three dimensions of human development: a long and healthy life, knowledge, and a decent standard of living.

Although hereditary factors, such as genetics, can explain five to ten per cent of breast cancer cases, this difference between regions suggests that other factors, such as lifestyle and environment, play an important role.

The last four decades have seen rapid economic development and globalisation, which have substantially altered the environments we inhabit and in which we eat food, termed the nutrition transition. This has been accompanied by increasing rates of obesity and a decline in physical activity – changes to factors such as these may be contributing to the rise in breast cancer.

Research from our recent cancer prevention report, Diet, Nutrition, Physical Activity and Cancer: a Global Perspective (the Third Expert Report) shows that being physically active and breastfeeding your baby, if possible, help protect against breast cancer. Conversely, being overweight or obese during adulthood and drinking alcohol increase risk.

Over 500,000 cases of cervical cancer will be diagnosed this year, making it the eighth most common cancer. When taking only women into account, cervical cancer jumps up to fourth place and will be responsible for nearly seven per cent of all cancers in women. Of particular note is the differences in rates between regions.

Overall, cancer rates are higher in countries with a very high HDI, compared with low HDI. This is thought to be related to ‘Western’ lifestyles. For cervical cancer, however, this pattern is reversed, with rates more than three times higher in countries with a low HDI. In some low HDI countries, such as Swaziland and Malawi, the rates are higher still, representing a significant burden from a largely preventable disease.

The vast majority of cervical cancer cases are diagnosed in women who also have a high-risk variant of human papilloma virus (HPV). This underlines the importance of having effective prevention strategies, such as HPV vaccination and screening – but this can be a challenge in settings with fewer resources.

Cancer is not inevitable. It is estimated that around 40 per cent of all cancer cases are preventable if modifiable exposures, such as not smoking, diet and physical activity, are optimised to minimise risk. The role of public policy is critically important in creating environments for people and communities that are conducive to following our Cancer Prevention Recommendations.

More concerted action is needed to prevent not just breast and cervical cancers, but cancer across the board.

Breastfeeding across the world in 2022