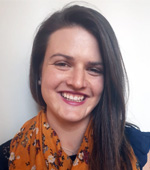 Inarie Jacobs is a registered dietitian working in Bambisana Hospital, South Africa. She is one of our 2019 Academy Fellows, and here she shares her work into the dietary patterns of South African women.

Bambisana Hospital, a primary healthcare facility, is situated in one of the most rural areas in South Africa and aims to serve and treat people living in extreme poverty. The hospital has limited nutritional supplements and medical supplies which makes it difficult to provide optimal healthcare. A typical day for me involves speaking with patients and educating them on the importance of being a healthy weight and following a healthy diet based on the South African Food Based Dietary Guidelines.

I am also part of an outreach team, visiting surrounding clinics, where I focus on promoting healthy cooking methods and following a healthy diet. It is particularly encouraging seeing and working with severe acute malnourished (SAM) infants and children, especially when they start showing signs of getting better. I also do my best to promote breastfeeding to mothers in this rural area and increase awareness of the benefits it can have, including reducing breast cancer risk.

South Africa from a nutritional point of view

South Africa is known for its beautiful landscapes and breathtaking scenery. It is a country rich in diversity and culture where 11 official languages are spoken. However, looking at South Africa from a nutritional point of view may not be as breathtaking as its landscapes.

The effects of the nutrition transition and urbanisation are clearly visible in South Africa. Traditional dietary patterns, previously known to be more nutritious, are changing to a more ‘westernised’ dietary pattern associated with increased consumption of refined grains, sugar and processed foods high in fat. This has led South Africa to face a double burden of both over and undernutrition. Overnutrition in the form of obesity is a known cause of breast cancer in postmenopausal women, while nutrient deficiencies in those who are undernourished may be linked to an increased breast cancer risk due to the lack of phytochemicals and antioxidants.

The relation between diet and breast cancer risk has been studied for decades, especially in developed countries. However, research on diet related to breast cancer risk is still lacking in low- and middle-income countries such as South Africa. My research is affiliated with the South African Breast Cancer (SABC) study (conducted at the Chris Hani Baragwanath Academic Hospital, urban Gauteng) which was funded by World Cancer Research Fund (WCRF) and investigated the influences of diet, physical activity and body size on breast cancer in African women.

Incidence rates of breast cancer are rising and it is now the second most common cancer in black South African women. High rates of late-stage breast cancer diagnoses are reported in South Africa, possibly due to a lack of adequate healthcare and early screening programmes as well as due to expensive cancer treatment. Prioritising health policies that target prevention would therefore be the ‘brush of choice’ for South Africa to paint a ‘reducing breast cancer incidence rate’ picture.

Our study showed that nutrient-rich, less energy-dense foods such as fresh fruit may decrease breast cancer risk. More energy-dense, nutrient-poor foods such as soup powders, potato chips and sauces may increase breast cancer risk in black (urban) South African women. These results are in line with the South African Food Based Dietary Guidelines and WCRF, which both promote a healthy diet to prevent cancer and other non-communicable diseases (NCDs).

However, despite this promotion of a healthy diet, our study showed ongoing high consumption of refined starchy grains, sugar and animal protein (mostly from processed foods), which is in line with a ‘westernised’ dietary pattern. It is also clear that obesity and overweight co-exist with low physical activity in black South African women. These lifestyle factors play an important role in the development of breast cancer and can be modified through changes in behaviour and attitude. However, high poverty rates were also noted in our study and this plays a key role in how and what food choices are made. This is concerning as it is known that healthier food products are often more expensive than less healthy ones in South Africa.

Emphasis should be drawn to the promotion of affordable and sustainable interventions, such as diets that can help prevent cancer and other NCDs by the inclusion of VAT-free foods in South Africa. Existing policies to reduce obesity and increase physical activity should be prioritised and promoted. It is also essential to prioritise behavioural and attitude changes towards adapting a healthy lifestyle in the South African population.